The Ballad of the White Horse

It's the longest poem I've ever read--and enjoyed from beginning to end. The Ballad of the White Horse--G.K. Chesterton's epic poem about King Alfred re-conquering England from invading Danes--is more than 2,500 lines long. 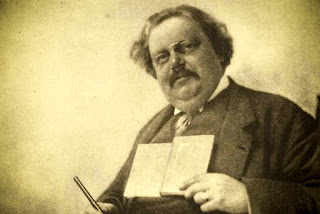 Welcome to another edition of "here is a thing I love, maybe you'd enjoy it too." I know people don't go in for epic poetry so much anymore. I have a book of Chesterton's poems--which I love--and it was years before I took the plunge and actually read the 80 pages of it that were the Ballad. But there's another way. Epic poetry was meant to be listened to. There are recordings out there--free ones. (More on that in a minute.) For an audiobook, the Ballad of the White Horse is actually quite short! I've listened to it three or four times by now while gardening. It always give me a boost.

Chesterton is an old-fashioned poet, in my favorite way. People mostly don't even know he wrote poetry, it's in a style that's so unfashionable today--but I love it. Ringing, rolling stanzas of iambic pentameter that thump and rock under you like a galloping horse; images clear and bright in heraldic colors... or primary colors, as we call most of them now... Yeah, it's not subtle, but he can write an incredible stanza:

Not for me the vaunt of woe;
Was I not from a boy
Vowed with the helmet and spear and spur
To the blood-red banner of joy? 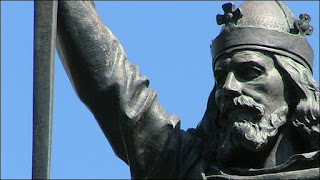 So the Ballad is about a time when the Danes (in the poem they're sometimes called pirates--if I understand rightly these were not technically Vikings but close enough) had invaded England and driven the Anglo-Saxon tribes off most of their lands. Alfred the king of Wessex was still fighting them, but it looked hopeless. Alfred is a bit of a figure of legend in England--there's quite a bit that isn't known for sure (though a lot surer than, say, Arthur--he definitely did exist!) and Chesterton feels free to weave his own heroic, idealized version and cast Alfred as defending civilization against the dark age that came with the fall of Rome.


And there was death on the Emperor
And night upon the Pope;
And Alfred, hiding in deep grass
Hardened his heart with hope.

Alfred soon hits his lowest point--a "conquered king" driven off his lands completely, taking refuge on an island in a river--and just at the moment when he concludes that "God has wearied of Wessex men" and is now on the side of the Danes, everything changes.

In the midst of a childhood memory that follows on his despair, he looks up stunned with a strange sense that the world has changed when he wasn't looking:

Fearfully plain the flowers grew
Like a child's book to read,
Or like a friend's face seen in a glass;
He looked, and there Our Lady was,
She stood and stroked the tall live grass
As a man strokes his steed.

(Mary plays a big role in the poem; Chesterton was Catholic. I love that image of her stroking the grass.)

Alfred asks her if he will ever win England back from the Danes. She tells him this is the one thing he cannot lawfully be told; that pagans seek sure knowledge of the future, but Christians are not allowed to know it and must instead rely on courage, faith and hope. Then she says: 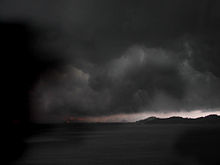 Night shall be thrice night over you,
And heaven an iron cope.
Do you have joy without a cause,
Yea, faith without a hope?

It's a little hard to analyze these words. (They weren't--nor is any of Chesterton's poetry--meant to be analyzed. They were meant to ring like music, or steel.) What do those last two questions actually mean? What I know is, the stanzas function as a challenge. It's worse than ever. What will you do? Do they stir you? They stir me.

(It's said that during both World Wars the Ballad was immensely popular. It was apparently so much part of public consciousness in the U.K. that twice during World War II newspaper headlines were simply quotes from it. One, after a great defeat, was "Nought for your comfort.")

They stir Alfred's allies too. When he seeks out three local leaders--a Saxon, a Roman, and a Celt--to ask them to gather their troops for another fight, all three of them refuse at first. The Celtic chieftain says that Alfred's people keep prophesying a victory that never comes, and Alfred replies that he has no such prophesy this time: "The thing I bear is a lesser thing, but comes in a better name." He quotes Mary's words--which set the man's heart on fire. The hosts gather for battle. 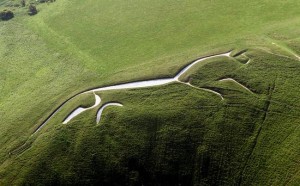 There's a lot more. Alfred spies out the Danish camp pretending to be a harper and sings a song identifying his cause with the White Horse of Uffington, a prehistoric chalk shape cut into the turf of a great hill; because his people cherish and maintain the Horse despite not even knowing who made it, he says, and because the invaders have instead let it go to ruin, he knows God will be on their side--the side of care and love of all things, not carelessness and destruction. Then comes the battle, with many moments that ringingly dramatize faith and persistence and hope. (And, a little anachronistically, democracy.) Should I tell you how the battle ends?

Maybe you can guess. But it's worth a listen.

You can find it here at Librivox--ah, Librivox my old friend. I've gotten so many hours of wonderful listening there. Classics and books I'd never heard of--all older works, in the public domain now--read and uploaded by volunteers and available entirely for free. Have a look round. I may post something myself there one day. Shouldn't say more yet.

Here's a little preview embedded--the section I quoted from:

And, for fun, here is the trailer for, apparently, a movie someone is making of it. Very much a homemade movie, but it's kind of fun:


And the whole darn thing embedded from Youtube, just in case that's the way you'd like to play it:

Let's pray for everyone the sea and sky threaten today.
Posted by Heather Munn at 6:19 PM