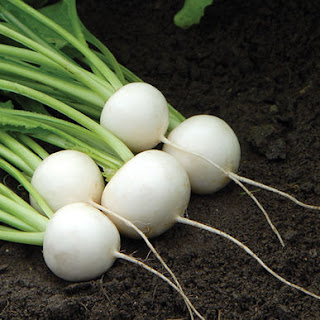 I realized I never put this recipe up here, though I'd planned to. I made this yesterday on the second coldest night of the year. Pureed soup like this is the only way to get the Boy really enthusiastic about eating vegetables; he calls this one "turn-up soup."

To me, turnips are the true winter soup vegetable. Sweet white turnips cut up in a stew of venison or beef along with carrots and potatoes (add the turnips last, they cook quickest) add a hint of sweetness that ties the other flavors together. If they're cooked long enough to fall apart a little, they also thicken the stew. Turnips in a thick, pureed winter soup offer a powerfully comforting mix of savory and sweet.

Do make sure you get sweet white turnips; I made this once with the purple-top kind and it had a bitter aftertaste that made me understand much better why turnips have a bad reputation. If you're in a position to know or choose plant varieties, the best white turnips are Oasis or Hakurei.

Brown the butter on medium-high heat in the bottom of your soup pot (a Dutch oven is ideal), then turn the heat down to medium and saute the onions till they're almost done. Add the garlic and saute for about half a minute more.

Puree the soup (you can pour it into a blender in batches, or use a wand or immersion blender), then add the milk, and add salt and pepper to taste.

Posted by Heather Munn at 1:32 PM No comments:

The gifts of the dragon

Every night I tell my son a bedtime story. We turn out the lights and for twenty minutes we lie there and he listens. I've told him stories from my childhood, fairy tales, ancient stories both Greek and Native American, Bible stories, history, even appropriately softened scenes from my WWII novels. I run out of material… often. I've told versions of the Three Bears involving Three Boomicorns (it's, uh, a unicorn that shoots rainbow balls out of its mouth?) or Three Sea Anemones. I've told the A New Hope episode of Star Wars (the parts I could remember!), without planning to, because I couldn't think of anything and randomly began “A long time ago, in a galaxy far, far away...”

But occasionally I make something up.

Here's the story I told my son last night. It's not the most original, being made up on the spot. But still. I thought it was worth sharing.

Once upon a time, there was a dragon. He lived on a mountain which he claimed as his own. But on top of that mountain was the only place where the starflowers grew, and everyone knew starflowers made the best medicine in the world. They could cure many diseases. But the dragon let no-one pick them. He said it was his mountain and he had a right to drive off tresspassers. He didn't owe anybody anything. Anyone who came seeking starflowers could expect a faceful of flame.

In a village nearby lived a young man whose mother had fallen desperately ill. Though she tried to pretend she was all right, he could see she could barely get out of bed and was failing fast. He decided to seek the starflowers—but how could he? He was no trained knight, warrior, or hunter. Only a peasant, an unarmed, inexperienced young man. What could he do?

He knelt by his wooden chest and got out a stone ball on which many tiny, curious characters were carved, and a small earthenware bottle out of which, when it was unstoppered, the most beautiful fragrance rose. He said, “You must let the dragon smell this, and you must show him the ball. I give these to you as gifts.” 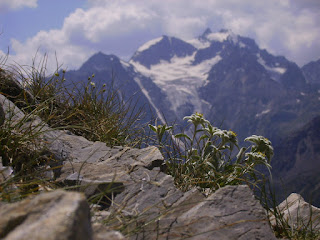 Then he said, “The dragon was not always as we know him now. There was a time, long ago, when he allowed people in need to come and pick the healing flowers. It was only later that he began refusing and driving us away with flame. It happened this way.

“One day a man came to the mountain and asked to pick starflowers, and the dragon allowed it. The man picked what he needed, and then picked more. He picked so many flowers the dragon became afraid. He saw in his mind his mountain gone barren, with too few flowers to make seed for more. He told the man to stop. The man became angry and refused. They say the dragon's roar could be heard for miles. The man returned empty-handed and with terrible burns.

“Since that day no-one has been allowed up the mountain,” said the old man of the forest, “no matter their need. This is all I know and all that I can tell you, but I pray you great blessing as you go on your way.”

And the young man went. He crossed the deep chasm that lay between his village and the mountain, and he walked up and up through the dark woods on the lower slopes. He saw ahead of him the light & green grass above the tree-line, and was afraid. But he kept going. He walked out into the open, and within less than a minute he saw a shadow above him, swift and huge. On the grass the shadow made the shape of great wings.

He stood and waited, and the dragon landed in front of him. He looked up, afraid, but not moving, and the dragon hesitated too. He had expected the young man to fight, run, or hide, and he didn't understand this stillness.

The young man, not knowing what else to do, unstoppered the bottle and held it out.

The dragon's eyes changed. They widened, and his face did not seem so ugly or frightening. “What is that?” he asked, and his booming voice held delight.

“By the Sun,” said the dragon. “I believe it is essence of fireflower. I have only smelled it once in my life, when I visited the Queen of Dragons. I will never forget it. There is nothing like it in the world, and very little that brings dragons greater joy.” 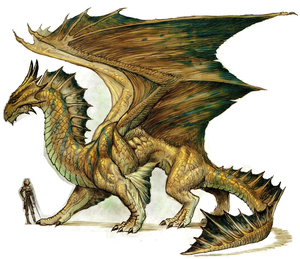 For a moment the young man thought to offer it as a trade for the starflowers he needed. But something held him back. He felt it was somehow the wrong move. After a moment he said, “You may have it. It's a gift.”

The dragon's eyes grew wider with delight. He reached out his claws and with surprising tenderness received the young man's gift.

They stood silent for a moment. Then the young man took a deep breath, and looked to the summit of the mountain. The dragon followed his gaze, and his great brows drew down. He had seen so many humans, grasping, wanting, stealing. He had thought this one was different.

“You came for my starflowers,” he growled deep in his chest. Smoke curled out from between his teeth. There was nothing good now in his face, and the young man trembled, and forced himself not to cower. He regretted deeply his choice not to offer a trade. He had given his only treasure away and gained nothing.

He didn't know what else to do. So he brought out the stone ball.

The dragon's face changed again. His eyes widened in surprise. “Why,” he said, “this is our language. These characters, can you read them?”

“Yes! This is a copy of the ancient Sphere of Law of the eldest dragons. I studied it when I was young. A small copy, but a dragon's eyes can read it. Yes, there they are, the twelve laws and the five injunctions… and…”

And the dragon began to weep.

The young man stared, and did not step back as the hot tears splashed in front of his feet. He could not imagine what was happening.

“… and the Rule of Flame,” whispered the dragon, and his whisper was loud as the voice of a man. “The Rule of Flame: share with those in need, and do not think only of your rights.”

“I am so sorry,” said the dragon. “Will you accept to let me fly you to the summit? And back to your home with the flowers? You must be in terrible need, to have come here and risked my flame, and perhaps it cannot wait.”

“Thank you,” whispered the young man. “Thank you.” 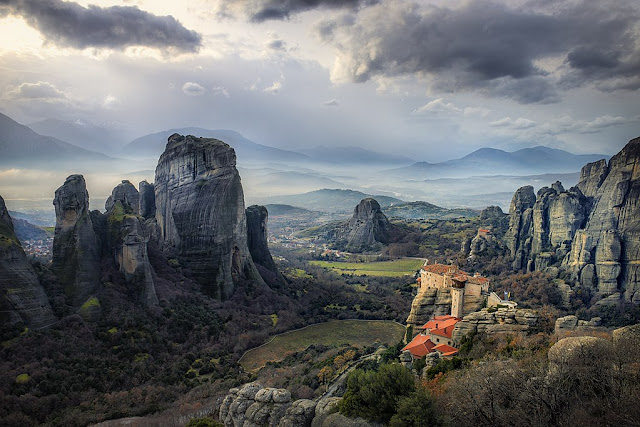 After his mother recovered they went often to the mountain, to visit their friend.

- Edelweiss in the Écrins range, photo by Giettois, CC BY-SA 4.0 from Wikipedia