I was making this yesterday with my friend Brandie, and found it was easier to put the recipe up on the blog than to print it out before running out the door to her house! I'll leave it up here in case anyone finds it useful.

It's a recipe I invented by accident, based on a recipe for cucumber-lime paletas that I found online due to having way too many cucumbers. (It's odd that only zucchini has the reputation for overproducing in the summer. I've found cucumbers keep up with them very well.) I made the recipe as a granita (sort of like a sorbet made without benefit of an ice-cream maker) for a party I was going to. I didn't have lime juice (so I used lemon) but I did have a few raspberries, and threw them in for color. Then I stirred it, and their pink color bled through the whole pale-green mixture. It didn't look great like that, so I blendered it, and added a handful more raspberries. Now it was all pink--and it was delicious. I never looked back--I've actually never made a cucumber-lime paleta yet! Maybe someday.


This tastes like raspberry with a subtle refreshing melony hint. Really discerning palates can sometimes guess it's cucumber. To me it's reminiscent of watermelon. Which might also be worth trying... 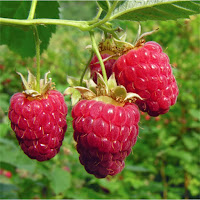 Puree cucumber, adding some of the simple syrup if necessary to get enough liquid in the blender for it to work smoothly.
Strain the pureed cucumber, keeping the liquid part. You can do this with a sieve or, for the easier method, a slotted spoon. It doesn't have to be perfect.
Mix all the ingredients in the blender and puree. You can save out a few raspberries to put them in, or on top, whole.
Freeze. There are several possible methods:
3. Simply freeze the mixture, then take it out of the freezer about ½ hour before serving, break it into chunks with a knife once it's thawed enough, and puree the chunks in the blender until smooth and icy. This makes quite a smooth texture but you'll need to serve immediately.
4. Simply make popsicles.
Posted by Heather Munn at 7:03 AM

Email ThisBlogThis!Share to TwitterShare to FacebookShare to Pinterest
Labels: Garden