I am re-running this, because I know that my publisher put my blog URL on the back of Flame in the Night, and if anyone new here shows up because of that, I want them to know about the person I dedicated the book to.

I've been realizing, as I recover from finishing my manuscript, just how many things I put on hold as I raced toward the finish line. (And then limped over it, having gotten a nasty chest cold in the last week of the work; between the book and my 3-year-old I managed to ration out just enough energy to finish.) One of those things, naturally, was cleaning the house. (You should've seen it.)

But I think another may have been grieving.

My dear friend Rich Foss died in January. I think it was January. It's been so surreal. It was expected, in a way; his health was bad at the best of times, and was getting worse. Then the blow came suddenly: he was newly diagnosed with an auto-immune disorder, when his immune system's continual fight against his chronic lung condition was all that was keeping him alive. 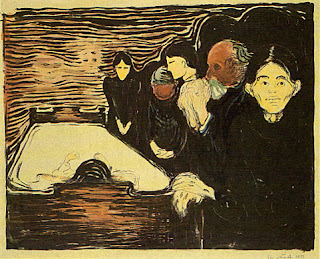 Rich was always a brave and honest man. He could barely walk; he'd had rheumatoid arthritis since he was seventeen, and by the time I met him his feet literally pointed in opposite directions. He spent the bulk of his time in a mechanized recliner, hooking himself up, with his wife Sarah's help, to three or four medical machines daily to stay alive. And I'd venture to say he spent the bulk of that time facing things head-on. (Not just his own things. All the things. But that's too long a story for today.) He had been talking openly about his own death for over a year, even when the rest of us felt that social impulse to tiptoe round it. He had known a long time that he wasn't going to live to a ripe old age. When the last diagnosis came, he accepted that it was the end. He went on hospice care.

But we did think he was going to live longer than two weeks.

When it happened, one level of my soul accepted it, in a stunned sort of way: this is happening, this is real. But for weeks afterward when I woke up, at the moment of coming back to consciousness, it would hit me with shock: Rich is dead. There was a part of me, down inside sleep, that still had no idea.

I used to visit Rich every Thursday evening, for years. We'd talk about this or that. But in the past two years we'd started to talk almost exclusively about the book I was writing. After the first few weeks of mostly talking about myself and my work I started to get uncomfortable: clearly I was monopolizing these conversations. I loved being able to talk about my writing--it's not easy to do so in a way people can even understand, when you're still in process, and Rich did--and Rich was always generous with his listening, but I needed to rein it in; even the most patient person would get tired of this week after week. I kept checking in with him about it, first in subtle ways, then asking him outright. Finally he managed to convince me: he was genuinely enjoying himself. 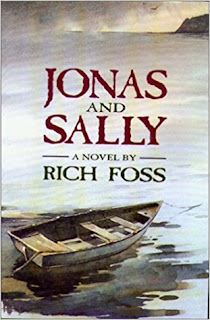 It felt like a miracle to me. That I could get what I so badly needed without having another person generously sacrifice their time for me; that I could get it while actually adding something good to someone else's day. Rich was a writer himself--if you can find a copy of his beautiful novel Jonas and Sally, I recommend it very heartily--and interested in Story, in the travails and dilemmas and emotions of human beings and how we resolve them, how we make the big choices, which is what fiction is about. As I went deeper into the book, themes developed in it that were very dear to his heart. He would tell me stories from his own life that re-echoed the themes, we would talk about what those things meant to us. Sometimes I would come to him with my latest thorny problem and he would give advice. Sometimes I would simply tell him the scene I wrote that day, and watch him react, and see that it was right. Sometimes what I was writing would lead into profound stories from memories he was sifting through and processing, knowing he was at the end of life. Sometimes he would cry.

(I think he would be all right with my telling you this. He was a very open person.)

Then came the time it became a miracle for him.

He used to be a leader, a writer, a mentor, a counselor. He was profoundly respected, it was clear at his funeral. But in his last few years he had no energy for the contributions he used to make; all his energy was spent in the sheer work of staying alive, managing his medical conditions--and that took work all right, a day-long routine of medical machines. One hour of conversation a day was pretty much what he had the energy for after that. And he needed more and more help--someone to come over & warm up his supper, for instance, which he could do but getting up and walking would wear him out. I did that often, I loved doing it, it meant a chance to talk with him, even if briefly. As things went more in that direction, I was stunned by how much that meant to him--that I wanted to.

It was getting harder and harder for him, being helped. He'd been helped all his life, of course, but he'd also been a leader. Now he talked about being an "outsider." Now most of the interactions in his day were someone coming over and doing him a favor. One that he wasn't able to return.

But with me he was. With me he had the energy (on a good day) to have at least a little bit of deeply meaningful conversation, because Story energized him; with me he was a mentor giving deeply valued advice and understanding, giving me something I needed very much. With me he was not just a receiver but also a giver, and he needed that. His soul needed that. We came to understand this end-of-life friendship as a deep gift of God to us both.

There was something about it that was very hard to understand, for me. It's this: God's power is made perfect in weakness. To receive, to be helped, isn't this a connection that has God in it? Simone Weil says "Compassion and gratitude come down from God, and when they are exchanged in a glance, God is present at the point where the eyes of those who give and the eyes of those who receive meet." I think that's beautiful. And true. I knew Rich agreed with me on this. And I knew Rich was deeply connected to God. But to see just how much it hurt him, this profoundly respected man, just wondering if he was a burden to the friends who stopped by to hook up his oxygen or microwave his pizza--I don't want to go into detail, honestly, I don't want to make you picture this, that might be a bridge too far in terms of openness--well, I couldn't parse it. What about the power of God?

What I learned from his feelings at the end of his life was this: oh Lord, Heather, it is so much harder than you think. 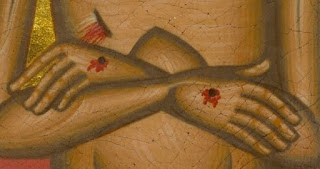 I have not been tested on this. But I will be. Except for those of us who die very, very suddenly, every single one of us will be. And that is the other thing I have learned: in the face of someone who is in that place of vulnerability, when you have to help and yet helping is painful, that is the one response that brings connection and relief: I will be in your place someday.

(It's ironic. It's one of the themes in my book. The Jewish characters and the pain of their vulnerability, the way the non-Jewish characters have a profound "I had no idea" shock when they finally come to understand--due to the threat their rescue efforts end up placing them under--what their friends have really been experiencing this whole time.)

Why? Why does weakness, plain material weakness, hurt us so much? Why does dependence on other people hurt us so much? Why are we ashamed of it? It's one of those places where all I've been taught about God seems so right and so good, and yet it is so hard for it to come to birth in our daily world. (What Simone Weil said is beautiful, and I still believe it, but I love her all the more because, though the quote doesn't show it, if you read the whole essay you will see that she fully understands the pain involved, and the difficulty; what she is describing in the quote is literally a miracle.)

Oh, and one more thing: I still believe. And Rich knows. Rich knows all of it now. 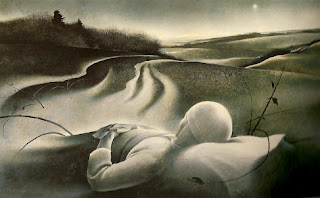 So here is the thing I can say at the end of this story, that I would not have dared to say at the beginning, because I fear so much to sound selfish about my friend's death. Ever since I finished the book I have been mourning what I used to think this time would hold. I was recording the book for Rich to listen to. I had just recorded Chapter 15 when he died. I went ahead and recorded Chapter 16, because I had other reasons for wanting a recording. It broke me up hard, to read it into the microphone, to feel no-one on the other end. I always believed he was going to read this book. I want him to read it, I want to put it in his hands. But they're gone.

And yes, I mourn the help he could have given me. There are very specific questions I want to ask him: should I change this? Is this over the top? And I don't dare tell people that part, out of context. But the help he gave me was the connection, the friendship, the gift, it was the help I gave him too. It was the help God gave us. It was the miracle.

Oh Lord, Heather. It is so much harder than you think.
Posted by Heather Munn at 6:02 PM 4 comments: