Scars: a reading from the Gospels


I'm listening to the Lord of the Rings on audiobook these days, and have a lot of thoughts forming on the story of Eowyn and the meaning of her deeds and her transformation at the end of the story. I almost wrote about it for today, but I want to take the time to make a good job of it, so that'll be next week. (Stay tuned.)

So I'm sharing another of my readings today, the short Biblical pieces I write. I wrote this one for a spiritual retreat we hosted, for which Paul had selected the story of Thomas as a theme. As a doubter myself, I've always been fascinated by Thomas, but this time--and I don't quite remember why--I chose to take a step back, or maybe sideways. I wrote the story from the point of view, not of Thomas himself, but of one of his fellow disciples: Simon the Zealot. It was interesting, writing from the point of view of a somewhat hardened freedom fighter. It didn't actually occur to me till halfway through the story that such a person would know exactly what a mortal wound looked like. This is one of the things writing does for me: it shows me things I would never see otherwise. I never pay such profound attention to Scripture as when I'm writing one of these readings; I can't. The writing itself takes me to a place I can't otherwise reach.


All of my scars have stories. But there's none of them I like to tell.

The mess on my left leg and arm is from the Romans. I was fifteen. Some officer, going somewhere important in his long red cloak, just rode me down on his horse. I was in the way, and what did he care about some Jewish boy? The rocks on the slope beneath the road took chunks out of my leg, and my arm up to the shoulder. The wounds turned bad. I was sick with fever for a week and they thought I would die. But I guess he got where he was going on time.

The men in our village talked about it for weeks. But there was nothing they could do. What did Rome care?

It's not exactly the kind of story you brag on.

I suppose that's part of why I joined the Zealots, in the end. Why I decided to fight them. There were other reasons. I wanted to free our country. But the look on my father's face when he said “There's nothing we can do,” and the pain and anger in my belly when I saw it, those things are burned into me as hard as the thick hard lines and ridges on my skin.

I suppose that's why I don't like to tell the stories. There are other scars. The ones you can't see hurt longer. I don't know how long. I don't know if they stop.

The other scars are from the fights that came after that. Battles, I suppose you could call them. The one on my face is one of those, the one people ask about. They generally expect me to be proud, to want to talk about it. There is some of it I'm still proud of, but I don't care to talk about it. One memory brings back another. Believe me, putting a sword into another man and pulling it out is not a thing a man wants to remember. 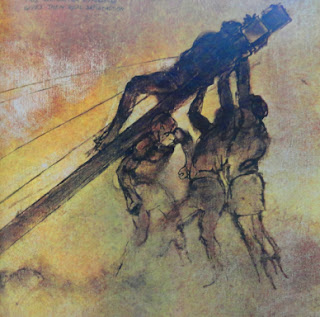 Those days are gone, of course, since I chose to follow Jesus. I chose to fight for a different kind of freedom. He sent me out preaching, going around the country with the others, telling people the kingdom of God had come. He taught us so much. We saw the power of God in him, and the kindness of God; we saw lepers healed and the dead come to life. We saw him come into Jerusalem in triumph, not at the head of an army, but riding on a donkey with the people all shouting for joy and waving branches. And then the Romans got him after all. The Romans and our own people, our so-called leaders, the cowards. I've seen death enough to know it, but I saw Hell that day.

When the women came to us three days later and said they'd seen angels, when Peter and John came and said he was alive again, I thought hard. He was different from any man I'd known, and I had believed God was in him. If anyone on earth could do such a thing, it wouldn't be anyone but him. But I held back. I'll admit: I held back because I was afraid to be a fool. To be made a fool of by hope.

He came to us that night, very late. We were still awake, with one lamp burning. He wasn't there, and then he was. Someone cried out. He looked like a spirit in the flickering light, like his spirit come to say goodbye on his way to God. That's what we thought he was.

He spoke, and his voice had life and blood and strength in it, as much as it ever had when he'd stood up on a hill and shouted his teaching to the crowds. “It's me,” he said. “I'm alive. Look at my hands and feet. Touch me. See if it's me.”

I lit another lamp. I cupped the flame in my hands till it blazed high. And there in the flare of light I saw it. He was reaching out his hand to Matthew, and there on his wrist was the place they'd driven the nail through. It was healed. He'd been dead three days, and it was the clean pink of a fresh-healed scar. And then I looked further, and there in his left side I saw a thing I'd never seen in my life—a thing I could swear no-one had ever seen. I saw the scar of a mortal wound, fresh-healed just like the other.

No-one could have survived a blow like that one. I've seen men take wounds like that, and I know. It went in, right to the heart. And there it was, that awful hole in his side, new-healed just like all the other scars. Testifying. It was him. He had been killed, and he was alive. God was in him, and all our hope had come again.

I believed. The scars did that for me. But I don't know that I would have learned the other thing, the stranger thing, if I hadn't seen what they did for Thomas.

Thomas wasn't there that night. He was afraid, I think. I don't know where he hid, but he came back to us at dawn, and when he heard what had happened he accused us of lying. Then changed his mind on the instant, before we could get angry, and said we must have dreamed it, it couldn't have been real. He said he'd believe it when he'd touched those scars we spoke of, when he'd put his hand in that hole. I saw the tears standing in his eyes, though he turned away to hide them.

It was days before Jesus came again. We stayed together, talking of what we'd seen, of what we ought to do. Thomas said nothing at all. He barely ate. When the others tried to tell him again that it was true, he turned away.

Thomas was my friend. I seem like a hard man to most people, I suppose. But I know how hard life can be when you're young, and it was hard for Thomas. I did what I could for him. It wasn't much.

Then Jesus came to us again.

He wasn't there, and then he was. And he was standing by Thomas. Thomas staggered to his feet. Looking at him. He never took his eyes off his face. I saw the tears start in them when Jesus said “Peace be with you.” And he still stood there just looking at him, looking into his eyes. He never looked down at all till Jesus told him outright to look at the scars.

“Put your hand in my side,” he said, and Thomas looked at him, and I saw his hand reach out, just a little, and draw back. It was shaking. But it wasn't fear. His eyes were wide. He seemed not to be sure it was allowed. Not to be sure he was allowed.

And I looked again at that wound, that open path into his heart. Those holes torn in his wrists and in his feet. He would have them forever, by the look of them. I realized I was rubbing one of the scars on my arm; one of the ones the Romans gave me before I could even fight back.

I remembered what he'd said, what we hadn't understood till later: that he would give his life as a ransom for many. That was the story of these scars. The story of how he had been killed and yet here he was alive. Of how—though I didn't quite understand it all yet—he had saved us all.

Thomas reached out his trembling hand, awe in his eyes, and put his hand into that wound. He looked like he was touching something holy. Something that had death in it, and life. The power of God, and the kindness of God.

And standing there watching him, I saw that he was. And he knew it. He saw those scars for exactly what they were.

And I wanted to touch them too.
Posted by Heather Munn at 12:53 PM