I wrote my first two novels with my mother, Lydia Munn. I'm glad I did. If I hadn't I might not understand one of the things I most want to tell the world today.

I was a kid when she started the first one--I don't know, twelve or so? She and my dad were missionaries in south central France, and she wanted to tell the world a true story not enough people knew--the story of Le Chambon-sur-Lignon, the little French town* that hid and saved thousands of Jews during the war under the leadership of Pastor André Trocmé. I remember reading her early drafts--the first book began in 1939, which, if you know WWII, saw exactly zero shots fired in France--and complaining there wasn't enough action. I explained to Mom what I thought the reader wanted instead of a teenage boy eyeing distant shadows of war while struggling to gain acceptance at a new school, and my Dad, listening, nodded sagely and said, "Ah, she thinks you need more jackboots at the door."

I suppose Mom must have explained to me that there were no jackboots at the door in 1939, and that for that she would need to start the novel in 1942. Because that was really the rub, and, I realized eventually, the reason Holocaust novels don't typically start in 1939. It was a problem I came up against in a more practical way when, twenty-two years old and launching out of college into a hoped-for writing career, I said yes to my Mom's request to rewrite her book and stand as co-author with her. Because Mom stuck to her guns, and that book--the book that eventually became How Huge the Night--still starts in 1939.

I'm so glad it does.

Because here is how the World War II story works, the story of hiding Jews in occupied Europe, the story we were told as children: the Nazis wanted to kill the Jews. They would kill anyone caught protecting a Jew. A few heroes protected them anyway. Would you have risked your life to save another person from death? Moral of the story: you should.

The people who told us this story forgot to mention something. No-one was ever presented with that choice.

Yes, the rescuers probably realized this eventually. It probably dawned on them at some point that the people they were protecting were actually going to be straight-up murdered (and not just unjustly incarcerated) if they were caught, and that they themselves might be too. But that's not the choice they made. Their choice had been made long ago. At least I know it was that way in Le Chambon. 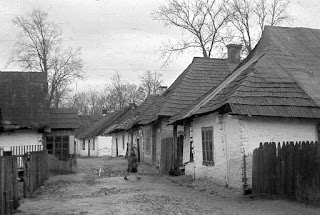 I learned what kind of choice they made when I wrote that first book with "not enough action" in it. I made it the center of that book, adapting my version from the true story of one of the first Jewish refugees to arrive in Le Chambon. The choice was this: it's a rough time in your country. The economy's destabilized, there are food shortages, the cities are crowded with homeless refugees, eating and not working, you can barely feed yourselves, you're just trying to get back to normal. A couple of dirty, ragged people get off the train. They have nowhere to go and it quickly becomes clear they have no papers, no ration cards, they're completely illegal, they're from an enemy country while we're at it and from a group publicly condemned by the government--they are in fact (and you're not wrong about this) the first trickle of what will become an avalanche of refugees entering your already stressed town, each one another mouth to feed. Do you want them here, eating up your family's already meager supply? Are these sketchy strangers, in fact, your problem?

If the people of Le Chambon had not welcomed refugees, they would never have hidden Jews. There would have been no Jews to hide.

What I learned from writing that book without enough action in it is that we are too obsessed with action. With life and death stakes. We've all read so many hero stories we believe we would sacrifice our lives like Harry Potter--and maybe we even would. What I learned is that that doesn't matter. If I throw myself on a grenade to save a crowd of orphans, and have not love, I am nothing but a clanging cymbal, and that's not just a spiritual metaphor. The fact is I'm not going to do it if I have not love, because I will not be there. If we don't care about others' simple needs for food and shelter and dignity, we are simply not going to be around when it's time to save their lives.

I also learned that we better freakin' welcome refugees.

The book I'm writing now, the third in the series, is the fulfillment of that childhood criticism I made. I'm writing it alone, because Mom was ready to step back and put the series into my hands. It starts in 1942, because the story's gotten there by now. And there are most definitely jackboots at the door.

But I'm grateful, so grateful, that I was not allowed to start there. Because I needed to learn those things. Because that novel is out there now with those things in it, in the Trump age I had no idea was coming. For what it's worth. It's not much, and I wouldn't have come up with even that much on my own.

So thank you, Mom.

* I'm giving the simplified version as we knew it at the time here. In actual fact, as we've learned since then, all the towns in the immediate area participated. (It's known as the Vivarais plateau and was historically a Protestant stronghold during religious persecution, which definitely had something to do with its people's reception of persecuted Jews.) Le Chambon was more of a hub than a town acting alone, and Trocmé was merely the most visible among many leaders.
Posted by Heather Munn at 2:51 PM

Email ThisBlogThis!Share to TwitterShare to FacebookShare to Pinterest
Labels: Writing