That's not meant to be a cute title or anything. It's just... what I'm doing these days.

Today the last family moved away from the Christian intentional community we lived in, which has folded. Well, the last family for awhile; but the other two families that remain are a steep four minutes' walk from us through the woods, and we're now sitting among four empty houses. Some of which need cleaning, which I suppose I will do. It's a sad day. A lot of people's hopes and dreams went into this place and it's hard to lose those. But mostly at this point, it's a tired day. The dissolution process has been so slow and long.

Things fall apart. The center cannot hold. The community, the world. I couldn't believe my eyes when I found out just how bad it is in Puerto Rico. They say the death toll could rise into the hundreds--not from the storm but from the aftermath, no power, no clean water, no refrigeration for medicines--in Florida a few people died because a generator failed, and here millions of people have no power. I don't know how you make the government listen, convince them that these people are entitled to just as much help as Texas and Florida, just as much help as all other American citizens (and I certainly don't know how I would do it, I who never could reconcile myself to people having different rights depending on whose jurisdiction they were born in.) But I found a couple of places to donate where the money goes directly to help as fast as possible...

And then to cap it all Trump has capped the number of refugees allowed into the U.S. at 45,000. I mean listen, I'm terrible with numbers, they usually mean nothing to me till I find another number to compare them with, but even I knew the moment I heard it that 45,000 is ridiculous. I honestly just re-googled it before writing this because it looked so puny I wondered if I'd forgotten a zero.

We are in the midst of the worst refugee crisis since World War II. And we're accepting fewer than ever. WHY? I can't even. I really should write a screed about this. I just don't have the energy. I guess I'll have to make do with--if you're newer to this blog or just haven't read them before--directing you to my post "If they hadn't welcomed refugees, they would never have hidden Jews." And/or to the story of Varian Fry, the American hero who saved thousands of people from the Holocaust by breaking U.S. law and smuggling them in under the nose of the State Department, an act of civil disobedience I salute with both hands.

We're in the midst of the worst refugee crisis and the worst famine year (click here to donate) since World War II, and not only our President but also our news media barely mentions it. Maybe I should just start getting my news from Oxfam. You know, there's a game I play in my head sometimes of imagining a perfect world. It's like Heaven or the new earth, except without the parts I can't imagine, immortality and bliss and all that. It's just ordinary life with one difference--we all trust each other. No evil. (Imagine the sheer amount of resources freed up, even in what we consider nice stable countries, with the need for protection from each other removed. What would we do with all that time? Garden? Create? Make sure everyone had enough food, maybe?) One day I imagined what the news media would be like in that world. Supposing there were still natural disasters & all--they would be messengers letting us know where to send help. That's what they would be. The thought almost made me cry. Maybe I should just start getting my news from Oxfam. 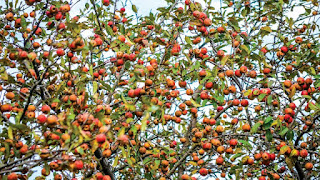 So what do I do with the world and the community falling apart around me? I make applesauce. It doesn't seem the best response, but it's the job in front of me. I've done what I could think of to do for the world, which is precious little, I've given the money I could give. I've done what I could think of to do for my neighbors, mostly little, practical, daily-life things for those who remain; little, practical parting gifts for those who are gone, and help loading the moving truck. And here I am, looking out my front door at four empty houses, a vineyard, and three laden apple trees. Not to mention, a little further off, an acre of raspberries that are theoretically dying of disease, but are giving off quite a decent crop as they do so. And my garden full of tomatillos and green beans that have ripened so slow in the strange cool August we've had (I'm not complaining... but sweet fall weather in August was sort of eerie) that they're only just ready to preserve now. So I preserve. Cook and can and freeze. What else is there to do?

You see, we're staying here. For the known future, at least, but that may be quite a long time. When the community folded, it gifted the land to a new non-profit called Hungry World Farm. It's local people who are starting it, people from the local Mennonite church--friends. We've gradually moved into caretaking this place, and we have an agreement with HWF to continue doing that through the transition and beyond. 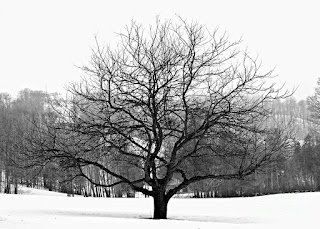 So I make grape juice. Thirty quarts for us, forty quarts to place in the old communal "Food Room" to be shared by people I know and people I don't yet know, people who will come. (That's an estimate. I don't want to count them! I would be OK with never seeing or smelling another steaming quart of grape juice right now.) So I make applesauce, and sock away apples in the root cellar believing someone will eat them. It's what you do, in the country. You take what God and the land have given you, and you preserve it against the coming cold. The coming storms. It's what you do, when the storms are all around and haven't reached you yet. There's precious little I can do but put my roots down and hold, and take what I am given and make food, but I'm grateful to be shown what's given me to do. And it's plain enough. You should see those apple trees. I've made sixteen quarts of applesauce already without picking a single apple. I swear. I just picked a bushel and a half of windfalls up off the ground. I may need to learn to make apple butter.