Elderberries, and seeking your food from God 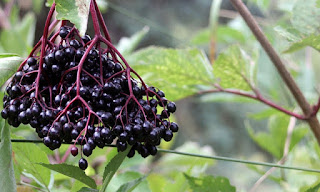 I biked a couple of miles to the Hennepin Canal this week, to pick elderberries. (Not actually for exercise; if I'd had a car I would have driven, but I don't and I wanted the berries. My carless condition is a story for another time, but I'll say this for it: it's easy to stay close to the earth when you don't have a choice!) I've been getting my manuscript in shape to send in to the publisher for the second time after some revisions—one reason I'm not up to any other really heavy writing this week—but elderberries wait for no-one. It was now or never.

Elderberries like to hang out over water. In French they're called sureau, which literally means “over water.” I noticed this year, picking some of my harvest from the bushes beside the road near home and some from the bushes hanging low over the canal, what a difference water makes to them: the road berries are puny, mostly seed, which I used to think the natural condition of elderberries—but the canal berries are fat and black and shiny, and when you squeeze them you can feel the juice. I'll be making that canal trip again next year. The berries hang so low over the water that the fattest clusters tempted me right into the canal—but it turned out to be barely ankle-deep at the edge. I'm in. 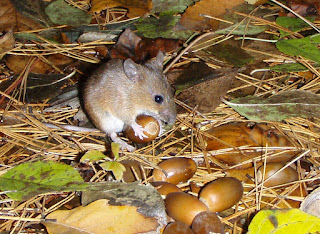 There aren't actually that many wild foods I regularly gather. More than the average person, I guess, but less than most enthusiasts. Elderberries for syrup; nettles for nettle soup (a French country recipe) and nettle tea (which tastes rather like spinach tea but is an excellent natural iron supplement); fiddleheads and ramps one time each spring, stir-fried together; and once, a solitary morel. (Maybe it'll happen again someday!) I hope to try acorns this fall—I'll have to look up the process, but I believe it involves soaking them and discarding the water to leach the bitter tannins out—largely because in playing with the Boy I once split an acorn open with a knife to show him the inside and I swear it smelled exactly like brown sugar. I couldn't stop smelling it; I still have it around somewhere to take a whiff from every now and then. I just have to find out how they taste, if only once.

There aren't that many wild foods I gather, but they're important to me. The process is important to me. There's something about the haphazardness of it, the searching—gathering rather than picking—that suits my notions of how life truly is. There's something about the wild itself, the unplanted place, whether woods or ditch or hedgerow; there's something about that unplanted place holding out food to you, for you to pick. Food out of the ground already seems a miracle to me, even when I work hard for it; I can't make a pumpkin or a raspberry, and the fact that they swell and ripen on the plants at all seems like a bounty and a gift. But foraging goes a step beyond: in the place God chooses, not in the place I choose, grows the thing I need. My only work is to search. 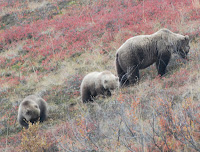 In my favorite psalm, Psalm 104, it says “The young lions roar after their prey, and seek their food from God.” I've never hunted, but I can see it. Foraging is like that too, and I'm sure hunting is even more so—especially if you do it for hunger, not for fun. There's so much hope involved and so much chance. You seek for the gift, but in the end the gift is given. There is no certainty. We walk out to seek our food in a world we don't control. Even if it's only a gallon or two of berries, it's a reminder of sorts: that our food, and ourselves, are not products of our making. That the earth and the Lord are the matrix of our lives; that we are creatures and not gods.

Every year in September I make elderberry syrup. The berries are reputed to have immune-boosting properties, and I believe it; if it happens not to be true, the syrup makes a truly delicious placebo (which you'll know, if you've read much about the placebo effect, is nothing to sneeze at.) I arm for the winter with elderberry syrup and echinacea tincture, the one from the wild and the other from my herb garden. Here's the recipe I'll be using for the syrup. Please note that if you ever try elderberries for yourself, it's important to cook them in some way no matter what you're making with them (some people dry them in an oven for instance) because heat rids them of some mildly toxic properties that can cause an upset stomach. 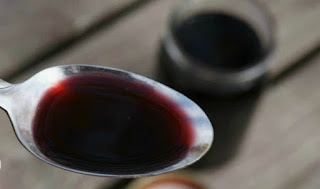 
Put the elderberries in a large pot with ¼ cup of water and simmer on low heat until they're soft. Strain out the pulp and reheat the juice in the pot; add the ginger and cloves. Simmer till the liquid is reduced to half its original volume. Measure the liquid and add an equal amount of honey. Stir the hot liquid and the honey together till thoroughly combined. Let cool.

This syrup will keep 12 weeks in the fridge, or all winter in the freezer. (The great thing about the honey is, it stays runny in the freezer, so it's very easy to dole out the freezer syrup a few spoonfuls at a time.)

When you're fighting a cold or flu, take 1 or 2 tablespoons of the syrup several times throughout the day (on pancakes if desired!)
Posted by Heather Munn at 1:48 PM