She opened her door: Magda Trocmé

“The struggle in Le Chambon began and ended in the privacy of people's homes. Decisions that were turning points in that struggle took place in kitchens, and not with male leaders as the only decision-makers, but often with women centrally involved.”


It was a cold evening in the terrible winter of 1940-1941—the worst winter France had known in a long time—and Magda Trocmé was feeding the fire. In her town up on the Vivarais plateau, where the winters were harsh at the best of times, this one was a time for worries. She was carefully adding bits of dried genêt brush, trying to build up the fire without wasting the precious firewood that would get them through till spring.

She heard a knock on the door.

She opened it to find a woman shawled in snow, fear and hunger in her face, hesitating. She was a German Jew, she said, a refugee. She had heard that here in Le Chambon, someone could help her. Could she come in?

Magda was the wife of André Trocmé, the pastor of the Reformed Church in Le Chambon-sur-Lignon. If you have heard of anyone in this story, you will have heard of him. He was a brilliant scholar and preacher, sent by his denomination to this small rural parish because he refused to stop preaching nonviolence. He was a big fish in a small pond, both a charismatic leader overflowing with ideas and one who warmly loved his people and visited them constantly. Since France's defeat in the spring of 1940, he had preached to his people that they must resist pressure to act against their consciences and against God, and he had himself resisted in politically symbolic ways. When it was decreed that all schoolchildren would now salute the French flag with the same salute used in Nazi Germany, he refused to enforce the order in his church-run school, and the principal of the public school followed suit. 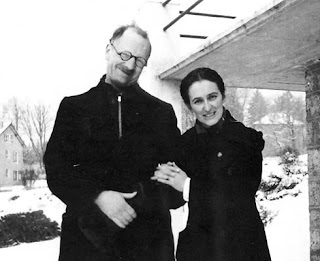 That was the time of symbols. There in the unoccupied zone, the new collaborationist Vichy regime was trying to capture the hearts and minds of the people with their program of National Revolution, its goal quite literally to make France great again. On the Vivarais plateau, people had long memories, and those memories were of government persecution and the brave resistance of their Huguenot ancestors. Their country's greatness wasn't their main concern. André Trocmé helped to focus and embolden the new sense of resistance welling up in their hearts.

But Magda opened the door.

Magda was not always sure just what she believed about God—or if she was, she never said so very definitely. She supported her husband in everything he did, but she was a practical woman, not much taken with words or symbols. She wanted to know what she should do—and do it. “I am not a good Christian at all,” she explained once, “but I have a few things I believe in... I never close my door, never refuse to help somebody who comes to me or asks for something. This I think is my kind of religion.”

The time had come for her kind of religion.

This was the first time a refugee in need had come to the village openly asking for help. When Magda gave it, she ushered in the second time in Le Chambon: the time of helping. Simply helping people who needed help. Within a year and a half, in the summer of 1942 when the round-ups began, the time of hiding would come; by then the village would be full to bursting, the vast majority of households sheltering at least one refugee, with many more in children's homes and dorms of the church-run boarding school. There would be false identity cards, planned hiding places, code-phrases to alert Jews to the presence of police.

But first there was an open door, a place by the fire, a bed for the night.

It was only for the night, that time, because there's another part to this story. Magda made a mistake.

Leaving the woman to warm herself by the fire, she went straight to the town hall, to ask the mayor to help her get a ration card and hopefully a false ID for the woman. There were no round-ups yet, but as a refugee and an illegal alien she could still be deported back to Germany by the French. Magda assumed the mayor would help. It was what she would have done; it was what her neighbors would have done. She was not experienced yet.

The man was shocked. How dare she endanger the French town under his care for the sake of one foreigner? He told Magda to get her out of town the next morning—at the very latest. She looked at him, turned on her heel, and walked back out to comply. She had no choice. She had told the authorities who and where the woman was. She had put her in danger and she would have to get her out if it.

Thankfully, Le Chambon—though it's the one you may have heard of—was not the only town on that plateau where people believed in welcoming the stranger. In the next town over, Magda knew a Catholic family who were willing to take the woman in. But she was ashamed, ashamed for her town and for herself, to be sending this refugee who had come to her back out into the snow. She did not remember that day as a triumph. She learned from it the precautions to take, the next time she opened her door. Not precautions against the person who stood on the other side, but for them.

Her mistake is really interesting to me. It seems so obvious to us in hindsight, and yet she was not a stupid or naïve person. She was a mother, an organizer, the equal partner of a brilliant man. She didn't suppose everyone approached needy refugees in the same way as her; just that everyone in her community did. And the crazy thing is that she was almost right. There were thousands of Jews in Le Chambon during the war, and no informers. Also—though I haven't been able to discover whether this was due to a change of heart or a change of mayor—it's a matter of record that for most of the war years the town's mayor fully supported the rescue efforts. Magda Trocme assumed a moral community that was almost there. And her assumption came true.

Who made it true? Who can say? Every person who opened their door, one by one, made it true. Every person who offered a little help, whatever someone needed. A pair of shoes, a meal, an invitation to hide in their hayloft anytime there was need. And yes, André Trocmé with his preaching helped make it true too. But his words and his symbols would have been nothing without the people willing to make them real. Without farmer after farmer saying (they were surprised after the war that anyone was impressed) “Well, they're in trouble, of course they can stay here.” Without woman after woman, standing in her kitchen, deciding she could stretch the rationed groceries in her pantry enough to feed another mouth.

Without his wife, opening that door.
Posted by Heather Munn at 7:24 PM