Okay, my title isn't quite accurate: Peter Feigl did acts of sabotage against the Nazis while he was a teenage Jewish refugee. Which is what makes his story fascinating to me. He's an illustration of a fact that sometimes gets forgotten when talking about the Holocaust: Jews resisted plenty. Jews rescued other Jews and resisted the Nazis in both nonviolent and violent ways. He's also an illustration of the fact that even in wartime, even doing very serious things, teenagers were teenagers. You'll see what I mean. 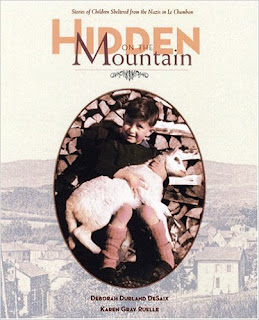 I've drawn his story from Hidden on the Mountain, a book of testimonies of children and young people who were hidden in or around Le Chambon.

Peter Feigl grew up in Vienna. His parents were both Jewish but did not practice Judaism; they were nominally Catholic, baptizing Peter at the age of 8 partly as a precaution since they believed at the time that the Nazis would only pursue religious Jews. When he was 9 they fled Austria, pretending they were going on a vacation to Belgium and not returning. Belgium was safe for the next two years--but in 1940 the Germans invaded. Peter's father was promptly arrested by the Belgians on suspicion of being a German spy.

Peter and his mother and grandmother, like thousands of other people, fled south on foot ahead of the approaching German army. The roads were filled with fleeing refugees--and the Germans strafed and bombed them. They were trying to create roadblocks to slow the French army as it rushed to the defense. Peter and his family survived this, made it to Paris right before an air raid started, said "Let's get out of here" and found a train that was still running, all the way to Bordeaux down south. As they made their way to a town near the Spanish border, thinking a border crossing might become necessary, they were picked up by the French police, probably because they were both "illegal" refugees and Jews, and sent to the Gurs internment camp. 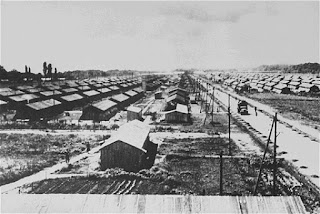 Gurs was an awful place, perhaps the worst of the internment camps, a place of rats and disease and inadequate food and cold, where a trip to the overflowing latrine held a very real danger of getting stuck in the deep clay mud. Luckily for Peter, his mother was a bold woman; a couple months after they were interned, she saw some Nazi officers come to inspect the camp, and she marched up to them and said "Heil Hitler! I am a German citizen and I demand to be released from this stinking hole immediately." She knew her family's passports (German ones, since Austria was Germany now) were just old enough not to have been stamped with a J for "Jew." Finding everything in order, the Nazis ordered the French to release the family--and called them a taxi.

They found a way to make a life for themselves in the south of France, and things started looking up for a little while--Peter's mother got a job with Swiss aid, his grandmother got a visa and departed for the U.S., and they actually located his father who was in another internment camp and got him released. But it didn't last.


Peter spent August 1942 at a summer camp. He was 13. I think they may have sent him there for safety's sake. There were rumors of roundups, of deportations to Poland. Near the end of the month Peter's father, still in poor health from his internment, rode 40 miles round-trip on his bicycle to visit Peter and bring him a little homemade bag made out of a handkerchief. After the visit it suddenly occurred to Peter just how far his father had come for this. He looked in the bag. It held all his mother's jewelry, and his father's watch. He started to cry, and thought, "I'll never see them again."

He was right. The huge roundup of August 26th, 1942 came a few days later, and his parents were caught in it and deported.

A few days later police came for him too, but the summer camp director had had a tip-off. She put Peter in bed and fed him bread balls soaked in vinegar which gave him a temporary high fever, because the French were not deporting people who were very ill. The police came back twice and each time she did it again.

Peter was sent to a children's home in Marseille while an aid agency tried to get him a visa to leave, but the Germans took over the southern zone of France and stopped all traffic from the ports before he could go. Then he got in trouble for talking to SS soldiers. Yes, he really did. Like I said--he was a teenager! He spoke fluent German, and was quite successful at getting extra food and chocolate out of them, so why not? The children's home director told him why not in no uncertain terms and sent him to Le Chambon. 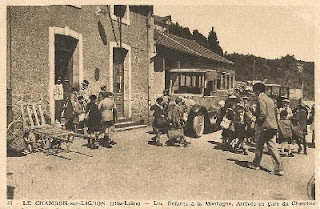 In Le Chambon he lived in a children's home directed by Daniel Trocmé, the younger cousin of Pastor Andre Trocmé. It sounds like a pleasant time. Peter fell in 14-year-old love with a young Spanish refugee, and made friends with housemates from all over--even one who was a German army deserter. They went to school, shared chores at the home, went out into the woods "to look for mushrooms" whenever they were told to--even when mushrooms weren't in season if you know what I mean. He was given new papers and a new last name.

He was also still a teenager. His diary was confiscated and hidden because he had written down real names of people who had helped him illegally. (It surfaced in a French flea market years after the war.) When friends gave him photos of themselves, he wrote both their real name and their fake name on the back. Thankfully nothing came of these things.

At 15 he was sent, with some fellow students, to another boarding school in a town called Figeac, north of Toulouse. (I'm not sure why, but I know Le Chambon was full to bursting, so if they found an ally who offered to take some kids I can see why they would have said yes.) Figeac was a bigger town, more on the main roads than Le Chambon, and it was 1944. With the Germans facing the prospect of an Allied invasion, the local Resistance was starting to fight them in earnest with some hope of success. (Some areas of France actually did liberate themselves before the Allied armies arrived.) Peter and his new friends at the boarding school wanted to lend a hand. 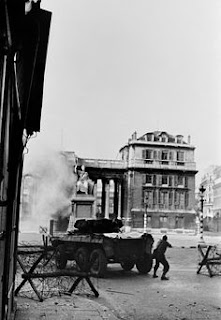 It started with some freelance sabotage--Peter and his friends going out at night to slash the tires of German army trucks. He almost got expelled over that one. But he also made friends with the Resistance men, who saw the potential in his fluent German. He translated stolen Germany army documents for them, and when the Germans commandeered the yard of his boarding school to park equipment in, he spied on them and reported their conversations to the Resistance. He and his friends also started pouring sugar into German gas tanks, a classic way to shut down a vehicle hard.

An SS division arrived in Figeac. When they started trying to arrest all the men of fighting age (16 and up) to keep them out of the Resistance ranks, Peter hid in a bell tower for 24 hours to elude them. But soon afterwards the Germans discovered that his boarding school was the source of their information leakage. It was only a matter of time before they found out it was him.

It was time for him to go.

He was sent with a group of kids to meet some passeurs near the Swiss border. They didn't have a guide with them on the train, they'd just been told where to get off and also to pretend not to know each other. When they got to their stop the others stayed in their seats and Peter didn't know what to do. He ended up jumping from the train as it started to move again. He found the passeurs, and another group that was slated to cross with them, and they hid in a field till the others joined them. 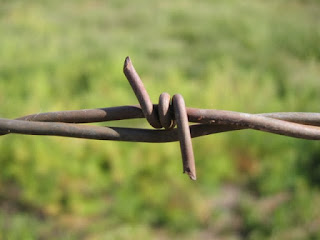 The crossing itself was a nightmare. Crossing in large groups was terribly dangerous, but it wasn't uncommon in 1944--people were truly desperate. The group got lost in the woods but finally made it to the border and hid in the soaking-wet grass waiting for the changing of the guard. At the signal to go they ran and slid under the barbed-wire fence and ran as fast as they could across no-man's-land. Suddenly a girl screamed "We're running the wrong way!" She had seen an armed soldier behind the barbed wire they were running towards. Peter saw him too and didn't think he held his rifle like a German. He yelled "No, keep going!" and ran on. He heard shots and screams behind him. He ran, and got under the barbed wire, and the soldier said, "Quick, get behind the buildings." He was a Swiss border guard.

Peter had made it out.

He ended up emigrating to the U.S. As of 2007 he lived in Florida. It's quite possible he still does. He would be 88 this year.
Posted by Heather Munn at 1:37 PM